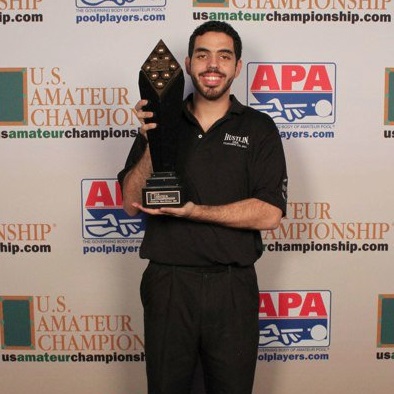 Raymond is a young, up and coming player out of Miami Florida. In his 8 short years of competitive pool playing, Raymond has amassed an impressive record of local, regional and national championships. Raymond, now 25 years old, has been around the game of pool since he was a young boy. His father introduced him to the sport when he was 4 years old, however his parents seemed to always miss his hints about wanting to learn the game more seriously. When he turned 17, Raymond took the matter into his own hands and began studying the game and practicing relentlessly. Working closely with local instructors, and top players, cleaning tables for time, and entering into top pro events like the Seminole Pro Tour, Raymond was able to refine his competitive skills and push his game to new levels.

In the last 3 years alone Raymond has won 4 US National championships including three time winner of the ACUI Collegiate National title and the prestigious US Amateur Championship. Considering this was all accomplished while Raymond was earning the first of his two degrees at Miami Dade College, and founding his own film production company, B.E.S. Films, Inc, this is very impressive indeed. Raymond is an avid user of OB Cues and has been playing with them since March of 2008. Raymond has played with the entire spectrum of OB Shafts and attributes a large part of his success to the consistency and top level performance of OB products. He hopes to continue to push his game to higher levels and one day fulfill his dream of competing for the US Mosconi Cup team all while being a positive role model for younger players and other members of the billiard industry.

Named Inside Pool’s Amateur Player of the year in 2011